It is often said that people only value things when their worth is measured in terms of dollars and cents. When it comes to recycling items that we all use everyday many of us don’t see what value could be gained performing the simple task of putting the used packaging or container in the recycling bin versus a trash can. When we throw something away it loses its value and in fact there are inherent costs connected to its disposal. We pay for the hauler to pick it up, the hauler pays the landfill to bury it and the item is gone but not forgotten. Very often this burial results in the release of methane gas polluting the atmosphere or leaches toxic chemicals into the groundwater contaminating the soil and water supply. What would happen if none of these recyclable items made it to the landfill and instead each and every one of them found its way to the recycling center and was processed and sold to be used over and over again? There would of course be the beneficial value to the environment gained by not having virgin materials cut down or dug up with all the resulting pollution that is part of the process. But for the sake of this article let’s just look at the monetary value of the recycled materials themselves and then imagine what could be done with that money instead.

In 2013 148,628.5 tons (29,725,800 pounds) of garbage was buried at the Grey Wolf landfill located in Dewey. This landfill is operated by Waste Management and provides service for Yavapai County. Of the tons of garbage buried it is estimated that 62% could have been recovered using the recycling methods employed by Sedona Recycles. These percentages of recyclables in garbage according to the EPA are 28% paper, 9% metal, 5% glass, 12% plastics, 8% rubber, leather and textiles equaling a total of 62%. Another 27% consists of landscape debris and food waste that could be composted and sold as soil amendment if there was a regional commercial composting facility, but we will deal with just the 62%. Recycled material prices fluctuate which is always one of the difficult parts of the recycling industry but using an average of the material prices for 2013 the estimated value of the recyclables that ended up buried in the regional landfill are as follows: Paper and cardboard which make up the majority of the material that could and should be recycled but end up at the landfill could have been sold if recovered for a total of $5,935,178 that is million with a capital M. Nearly 6 million dollars worth of recoverable material was buried in one year alone and in the case of paper in particular there is a substantial release of methane gas in the decomposition process which is a significant contributor to greenhouse gas. The values of the remaining items that make up the 62% are plastics valued at $1,980,212. This mix of plastics contains everything from water bottles to bumpers and as is the case with most plastics these materials break down into ever smaller pieces but never truly go away. The glass has a value of $329,682 Aluminum cans by volume are valued at $608,880, steel cans and scrap steel $199,965 and textiles which include leather and rubber $266,129. All totaled this is $9,111,081. The question begs to be answered couldn’t we find better uses for this money than buried forever in the ground. Remember this is only a one year total and the Grey Wolf landfill has been in place for 21 years. So if we follow that to its logical conclusion we are looking at an estimated $190 million dollars buried.

Other countries are coming to the realization that there is buried treasure in the landfills and are beginning the painstaking job of mining them to recover recyclables. There are a number of reasons for attempting this process. The knowledge that resources are finite and the cost of extraction of virgin materials is an expensive undertaking has prompted some interest in this technique. Others in an attempt to extend the life of their landfill are digging them up and removing the materials that can be recycled. This is a very strange concept because the fact is the materials never had to be buried in the first place. It is like baking a cake and then trying to get back the sugar, flour and eggs. Wouldn’t the most sensible solution be for the recyclable materials to never make it to the landfill in the first place? It is more important than ever to be conscious of our actions and the value lost or gained by our choices. Nine million dollars infused into our regional economy yearly could do a lot of good for our communities and our environment. The additional recyclables would create good paying jobs while contributing to our sustainability goals. So when contemplating what to do with that plastic water bottle or piece of cardboard remember their value in economic and environmental terms and make the informed choice to recycle.

The lobby has reopened. Collection of Styrofoam, batteries, packing materials, printer ink cartridges, and egg cartons is currently available Monday through Saturday from 8am to 4pm. 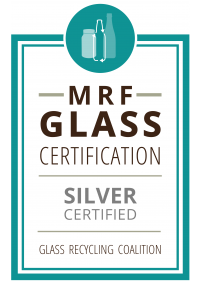